Writing an effective script for your video can be a handful. Done well, however, it can help you find a balance between written content and visualization, effectively conveying how your product can help your target audience with their specific pain points.

Here’s how to craft an explainer video script that breaks down complex ideas, outlines an engaging story, communicates your brand’s personality, and delivers a strong takeaway.

Why Do You Need an Explainer Video Script?

Persuasive video content is a powerful tool that can fuel digital marketing campaigns.

Explainer videos, such as product demos and how-to videos, are a staple for many marketers – and for good reason. They introduce your product to potential customers, educate them about additional features and benefits, and build trust.

The backbone of any successful explainer video is its script.

An explainer video script comprises the dialogue the voice artist (narrator) will say in the video and the message that’ll be delivered by it. It further stands to reason that the way the scenes are described can significantly affect the mood and decision of the viewer. This makes a well-crafted script one of the most important parts of the entire video production process.

What’s even more, a good video script makes it easier to:

Understanding the fundamental steps of video scriptwriting and adding your own creativity to it is what sets your business apart.

Regardless of the industry, most explainer video scripts are made up of five main components – opening, problem, solution, reasoning, and call-to-action.

Step 1: Grab the Attention From the Beginning

Just like written content, your video script needs to hook the audience in the very first few lines. After all, while video is a preferred medium for learning new things, if the viewer doesn’t feel engaged with it, they can bounce just as quickly as they would from an article.

The key to engaging your viewers in a video script is using the first 10 seconds to introduce the narrator and what the audience is going to learn by the end of the video. You can do this through a powerful story, surprising start, a different perspective, or anything else that will give your unique target audience a reason to care right off the bat.

Step 2: Set Up the Problem

At this stage of the explainer video script, your goal should be to communicate the problem your audience is facing in a way that strikes a chord. Think about how this challenge might be manifesting in the viewer’s life and how it’s holding them back.

Establishing the problem and helping viewers relate is a good strategy to generate interest and encourage people to watch the video until the end. Focus on your audience’s pain points, without showing your brand’s features and benefits yet.

This is where you should show your audience how your business can help them. Highlight your expertise and showcase what makes you different.

If you are laying out a complex idea or data, remember to provide context, as well. Statistics are a great way to present insights, but you’ll also need to state why these data points matter to the viewer.

At this step, explain why your proposed solution is better than those of the competition and how it solves the viewer’s problem better than other companies in the market.

If you operate in a highly competitive field, think about highlighting the drawbacks or inconveniences the audience experiences when using a competitor’s product or service.

Remember: to reassure viewers that you offer the right solution for them, your script and video should state clear steps showing your product is actually capable of solving the aforementioned problem.

Step 5: Wrap It With a Call to Action

Because explainer videos can take significant production effort, it’s important to have a specific action that will lead your viewers in the direction you want after watching the video.

Using a strong call to action (CTA) to direct viewers to a clear next step is the key to a strategic video marketing workflow, and an excellent opportunity to boost conversions.

To help your audience understand what you expect from them – and avoid diluting the power of your call to action – only include a single CTA with transparent and specific instructions.

Your story can determine the success of your explainer video. Explaining complex ideas and making them memorable, however, can be tricky.

Oftentimes, using a template is an excellent way to help you reflect on the plot and write down all the resources needed to make the video happen (e.g. location and equipment).

Whether you’re looking to create a script from scratch or strengthen your current story, formatting your script can be as easy as creating a simple table with three columns. 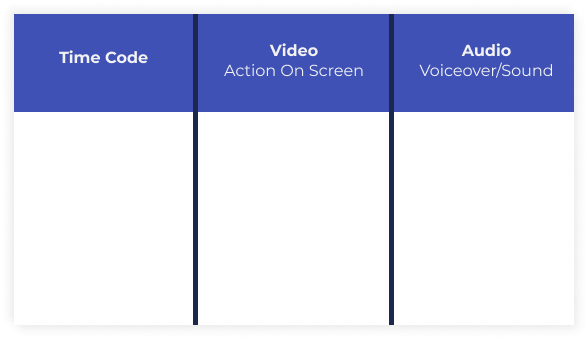 While simple, this template can help you map out how the end product will look and sound, ensuring that the video team knows exactly when and what’s supposed to be happening with both the audio and visual components. 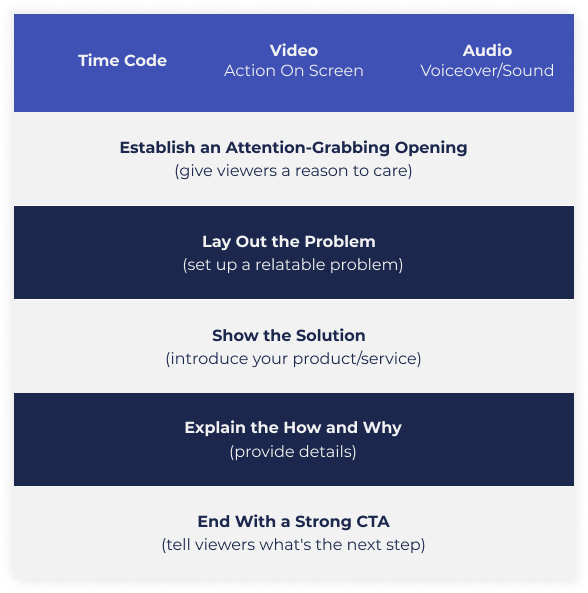 To kick-start the scriptwriting process and craft your own story, use the Explainer Video Script Template. You can fill in the blanks with your content and add as many blocks as needed to cover all the shots in your explainer video.

Once you understand the basics of how to make a script for your explainer video, you can start exploring best practices to plan and build a robust script writing strategy.

Here are four valuable tips to help you enhance your explainer video script.

Keep It Short and Clear

The effectiveness of an explainer video script often lies in its duration. The longer it is, the less impact it’ll have and the less likely people are to stick until the end.

For most explainer videos, a reasonable duration would be anywhere between 60 and 120 seconds. That often means aiming for about 125 – 150 words per minute to ensure that your video is comprehensive, yet easy to remember.

When crafting your script, consider using a conversational tone. As a rule of thumb, your script should match the way we naturally speak, avoiding complicated language and awkward pronunciation.

Our collective attention span is decreasing, which means that you need to be straightforward and compelling when communicating the core message of your explainer videos.

As you’re writing, it helps to simplify the message and place it in the intro or the first 30 seconds of the script. This way, your audience knows what the video is about, as well as what to pay attention to.

Speak Directly to the Audience

When creating an explainer video, be sure to specifically address your audience at the beginning of the script. Use personal pronouns such as “you”, show them things that they’re interested in, and tell them what they need to know about you.

Speaking directly to your target audience is an important part of getting their attention and building a trustworthy relationship.

While the five-step script writing structure will give you a wonderful framework to start developing a script, the story you tell viewers is what will ultimately make or break your explainer video.

A good story gives people a familiar path to follow, has a strong takeaway, and makes the viewer feel invested.

To keep viewers hooked from beginning to end, make your story characters relatable, create a strong arc, and use emotional triggers.

At the end of the day, no matter the type of video you choose to create, a solid script that accounts for plot, emotion, sound, visuals, and perspective should be on your priority list.

Nailing the fundamentals of video scriptwriting and good storytelling is essential for creating a content piece that boosts brand awareness and promotes deeper engagement.

In need of a little extra help with your video content? Read our tips on how to make a video marketing campaign go viral. 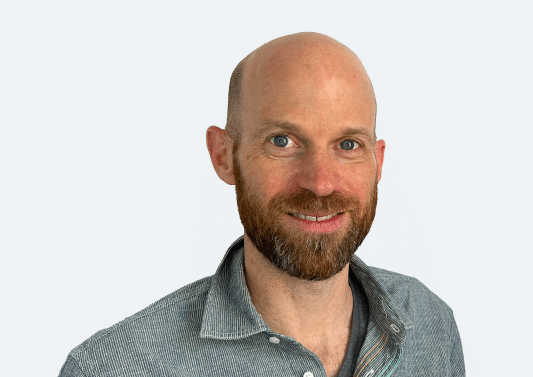 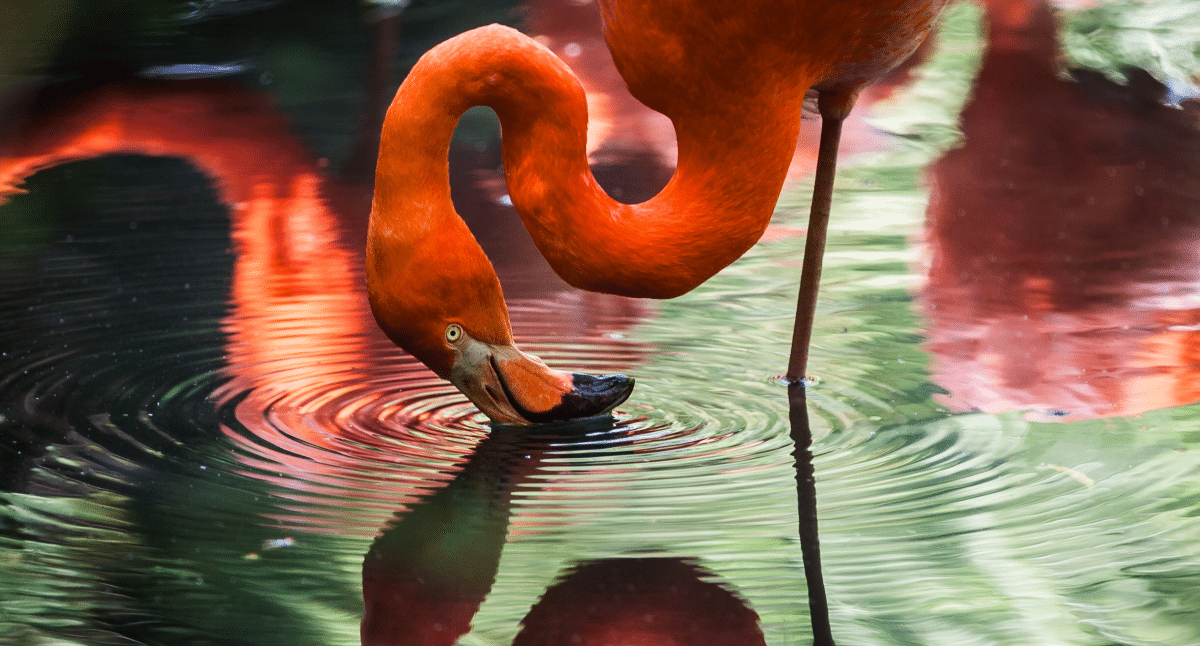 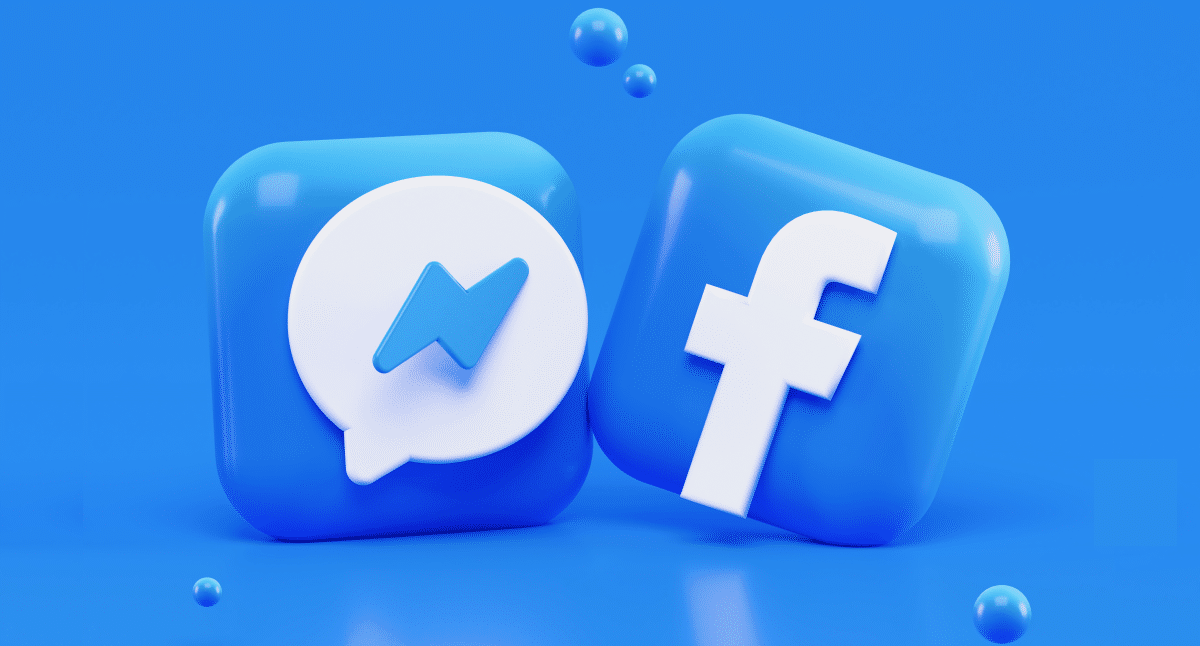